'Know Rize' is a new interview series that we hope to bring you more often, to help you get to know the club players and staff members better.

We're hitting it off by catching up with Sake, who joined the club as a Hearthstone Player-Streamer last year. With that we'll jump right in - Sake's responses are in green.

H: So let's start from the beginning, how did you get into gaming?

S: Growing up in a very strict household, I couldn't really get into gaming until I was 19 years old - so by that time the urge to play games was already overflowing. When I finally got my hands on a PC I fell in love with so many different games and have been ever since.

H: What was your all-time favourite solo gaming experience then?

S: Probably Anno, based on how much time I spent over the years playing that series! 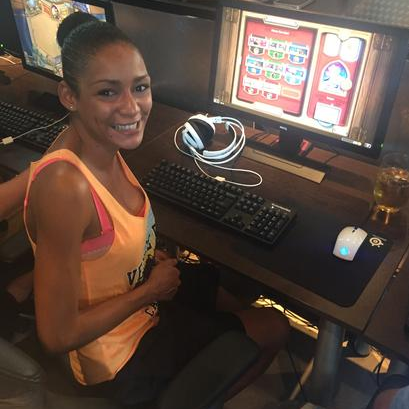 Sake at a Respawn Weekly in Vienna

H: How did competitive gaming find its way into your life?

S: As a kid, I was into traditional Sports. I never thought about 'Competitive Gaming' aside from just trying to whup my friends' ass.

I got into the competitive / eSport scene almost by accident as I wanted to see how I'd do against others online in Hearthstone. It came rather late considering I had been watching the game for a while as a spectator.

H: ..and now you're here. How are you finding life under the Rize banner?

S: Two years ago I couldn't have imagined where I'd be right now. It's great. I find it incredibly motivating and empowering to have a club support me like this.

Rize is like a family to me now and it's great how we all support each other - I feel lucky to be able to be part of it!

H: That's really amazing to hear. As you'll have experienced we're an open door here in terms of engaging with our players, be it talking through their ambitions and the road to achieving them, overcoming issues together as a unit, or just to take a break and have fun. So it's really positive to hear feedback from players that they feel at home here.

Next question, what player do you most look up to in your chosen game (Hearthstone)?

S: Another tough one. I follow a few pro-players but Lifecoach is the overall player that I feel brings a lot to the table. I have definitely learned a lot by watching his streams. Honorable mentions go to Trump and Kolento.

H: Good choices, if you could compete at an international event, what country would it be?

S: There are so many major events here in Europe, but to get to the USA would be pretty amazing.

H: If you could be the best in the world at any game, other than Hearthstone, what would it be?

S: Well, my second favourite game is Overwatch, so I guess it would be cool to be the best in that.

H: I think everyone has enjoyed tuning into your stream, what are your immediate plans with that?

S: I'm working towards more regular streams and trying to increase my followers. I really enjoy streaming and interacting and exchanging with my viewers, its great to be able to do that. I just want to keep progressing it really - and thank you to everyone who has supported me so far!

H: I think that's what they call a wrap. Thanks for talking with me, and good luck on the weekend.

Sake is going to be in action this weekend at G2 Lifecoach's Throne of Cards IV Qualifier after placing a respectable 5th at the last event. Be sure to check out Sake's stream in the meantime for Hearthstone and other games!